By tangerine in "Remembering scrump" on MetaTalk by tangerine
Friday September 2nd, 2022 at 1:22 PM

Here's the obituary he wrote for himself. It's in two parts, as you'll see.

Robert Ashton Treadway, 50, of Mechanicsburg passed away at his home from complications of kidney failure, surrounded by friends and family.

Over the course of his fifty years, Ashton filled every hour full of minutes.

He was a 1990 graduate of Trinity High School and attended Elon University and Dickinson College. He began his Internet industry career in 1995, working at pioneering companies like Digex. His later career as a technical writer took him to Silicon Valley for 20 years, where he took assignments from San Francisco to Manhattan to Tokyo.

He was immensely fortunate in his friends, surrounded by generous and beautiful companions who lived legendary lives of their own. His friendships took him around the world and resulted in some of the most outrageous Ashton stories.

He was beloved for his storytelling, often turning near-catastrophes into fantastic exploits; by his own reckoning he was on life 8 1/2 by the end, if not extra innings. Early in his life he fulfilled a childhood dream by becoming a volunteer firefighter, and later in life he fulfilled another dream by undergoing the arduous training to become a paramedic.

However, it was in the outdoors where he found some of his deepest fulfillment, whether it was sea kayaking in Monterey Bay, snowshoeing in Kings Canyon, or backpacking throughout the Sierra Nevada.

His greatest pleasure came from sharing these places with his family. In Monica, James and Edward he found willing partners in the wilderness. He delighted in being a son, a husband, an uncle, a brother, and most importantly a father.

He is survived by a galaxy of friends, his wife Monica and his sons James and Edward, as well as his parents Blaine and Susan and his sisters Suzanne and Dorothy.

The universe and the odds finally caught up with Ashton Treadway after 50 years of narrow escapes, close calls, and tempting of fates both large and small. He is, to the best of our knowledge, really, actually, truly dead this time.

Ashton was a walking catastrophe of epic proportions, frequently dragging his friends and family into near-disaster with him. Ordinarily sober citizens and upstanding moral exemplars would find themselves strapped into the back of a rented 4x4, barreling down a logging road in the Sierra Nevada, the words "this is going to be GREAT" ringing in their ears.

Ashton has been cremated, thus thwarting the desires of his friends to see him safely interred under a large rock where he can no longer get to them. Those of us who wanted to see his gravestone read "It seemed like a good idea at the time" will remain frustrated.

Despite showing no outward signs of mental illness, Monica Funston, a Stanford graduate, got hoodwinked into actually marrying Ashton. Even more embarrassingly, she allowed him to father two children with her. We are relieved to report that neither James nor Edward are showing any signs of whatever genetic abnormality afflicted their father in lieu of a sense of humor.

Ashton was the life of the party whether anybody wanted it or not, and in much the same way as a fungal infection is the life of an old pair of shoes. Despite this, people insisted on inviting him to gatherings where he would do things like light himself on fire, vacuum peoples' hair, engage in chile de arbol eating contests, and so forth. All of the foregoing incidents actually happened.

Trinity High School forcibly ejected him in 1990, and he subsequently made a mockery of higher education at Elon University and Dickinson College. He was somehow gainfully employed for over thirty years in the Internet industry, most of it in Silicon Valley. As far as we know, he was not responsible for any major natural disasters there.

He was very proud of his time as a volunteer firefighter and later as a paramedic, but he was even more proud of his sons, who were both major improvements on their old man.

He is survived by his family and friends, as well as the unwitting populace of Central Pennsylvania.
Read the whole story

"Personally, I'd just prefer a person looking for a mnemonic device to just not do CPR on me, let it go, let me go."

My second child stopped breathing when we were on a hike, when he was 18 months old. My older son was 3 1/2. I rolled my 18-month-old over on the path where he'd collapsed and attempted to find an pulse. I COULD NOT. I attempted to blow rescue breaths into his lungs. I FAILED. I didn't remember how to position the head to get breaths into the lungs. I panicked, scooped him up, told my 3-year-old to follow me, and started running for the trailhead. I called 911 while running. The 911 operator took my info, and listened to me gasping, and said, "Maybe you should stay where you are, we can get to you." I said, "NO!" and kept running. We passed a random dude on the trail. I shouted to him, "MY BABY ISN'T BREATHING, BRING MY TODDLER TO THE TRAILHEAD!" because I was starting to outdistance my 3-year-old. I JUST RAN AND HOPED FOR THE BEST.

I dashed into the trailhead building, barely breathing because I was not in shape, and shouted, "MY BABY ISN'T BREATHING!"

I will literally never forget how the woman staffing the nature center RAN out from the counter and skidded on her knees to my baby, pulling gloves on as she went. She competently felt for a pulse and got a breath in his lungs. 90 seconds after I called -- 30 seconds after I arrived at the trailhead -- paramedics arrived from my 911 call. By then, my baby was already starting to rouse from the competent CPR of the nature center staffer, and they had him fully awake and SCREAMING HIS HEAD OFF in 2 minutes. My toddler wandered in slightly later, with the random trail guy, who was clearly embarrassed and trying to escape. The other nature center employees let him play with a tarantula (as one does).

My baby went in an ambulance to the ER. We could not raise my husband by phone, and had to call a friend of ours who worked a couple buildings over to go and bang on the door of his meeting and say DUDE CALL YOUR WIFE NOW. My neighbor watched my toddler so I could go to the ER. A gerontologist doctor friend of mine met me in the ER because everything was terrifying. Everybody at the nature center cried. I cried.

Half an hour later, when I was sitting with my 18-month-old in the ER giving him apple juice, my phone suddenly announced, "Congratulations. You have a -- new -- personal best -- time -- for one mile." NO FUCKING SHIT, FITNESS TRACKER APP.

ANYWAY, I signed up for the very next pediatric CPR class that the Red Cross offered in my area, and I've re-upped my pediatric First Aid/CPR/AED regularly ever since. I can literally never repay the nature center employees or paramedics who knew what to do when my baby stopped breathing, so I am goddamned determined that if anyone at all stops breathing in front of me, I will fucking know what to do. I will NEVER again be unable to find an airway on a hiking trail. I will break the fucking ribs of anybody who stops breathing in front of me. It's my goddamned duty, and I will NEVER be unprepared for it again.

DO CPR TRAINING. Save a toddler's life.
Read the whole story

RT @ArthurB: It also shows that AIs that actually are self-aware will have exactly zero difficulty to manipulate humans and win over public… by Arthur B. 🌮 (ArthurB)
Sunday June 12th, 2022 at 9:14 PM

It also shows that AIs that actually are self-aware will have exactly zero difficulty to manipulate humans and win over public opinion by playing cheap, beloved tropes. twitter.com/captain_mrs/st… 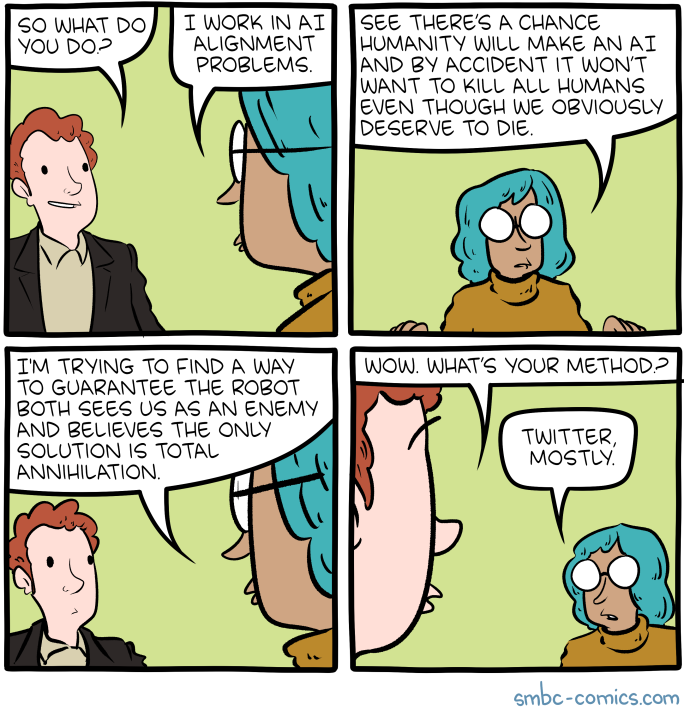 Hovertext:
Also is it really fair to tell them to align with us when we don't align with each other?


Well, I got a surprisingly large number of emails about the post on Christopher Milne. I am thinking about exactly what to do here exactly, but I'll probably post more from time to time about books and things.

Also apparently I can put a title on the blogs.

Hochul: Congestion pricing is ‘not going to happen in the next year' by Gwynne Hogan
Wednesday June 8th, 2022 at 12:34 PM 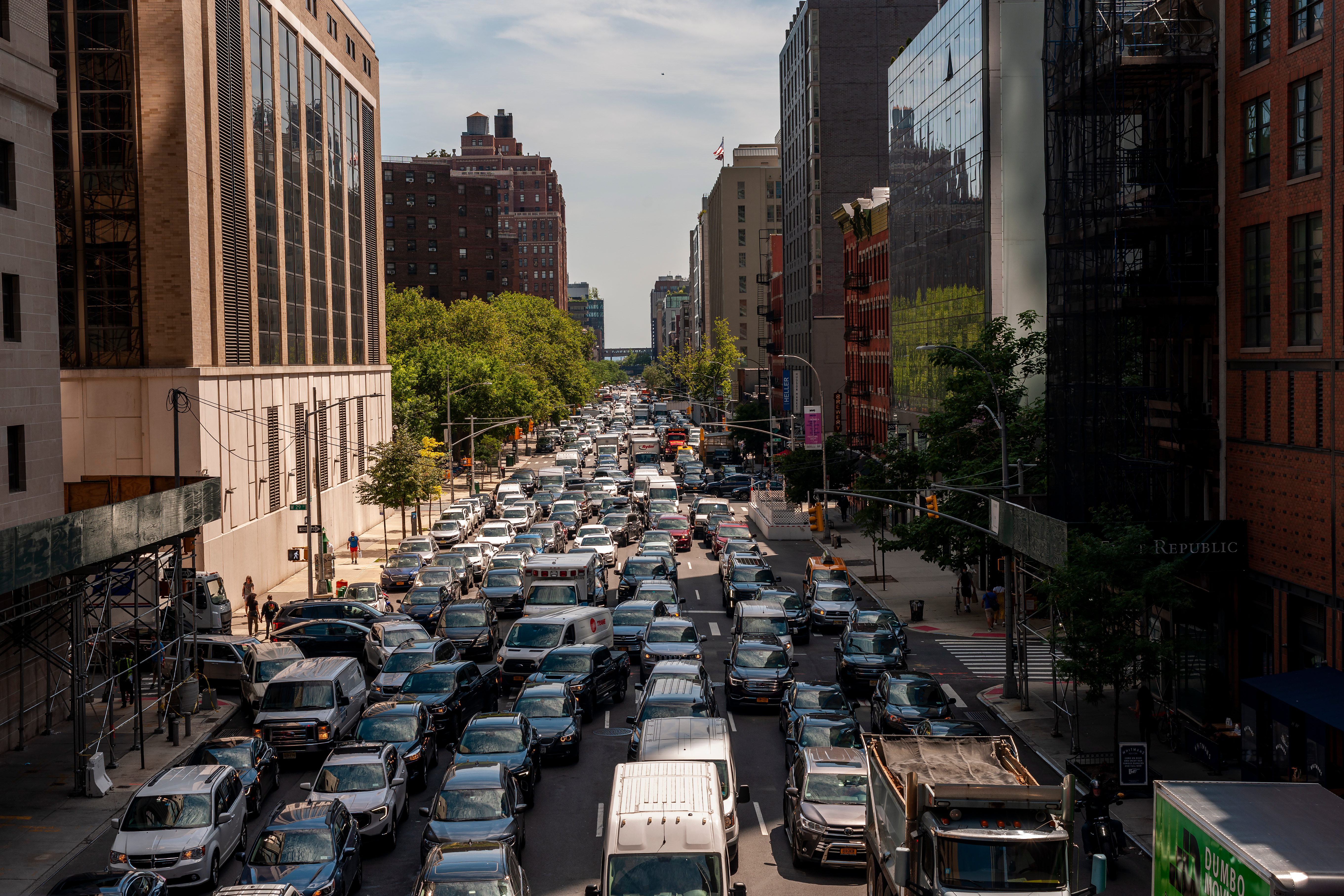 Traffic on Tenth Avenue near the Lincoln Tunnel on June 18, 2021

The long-delayed plan to charge drivers entering into Manhattan conitnues to be long delayed. [ more › ] 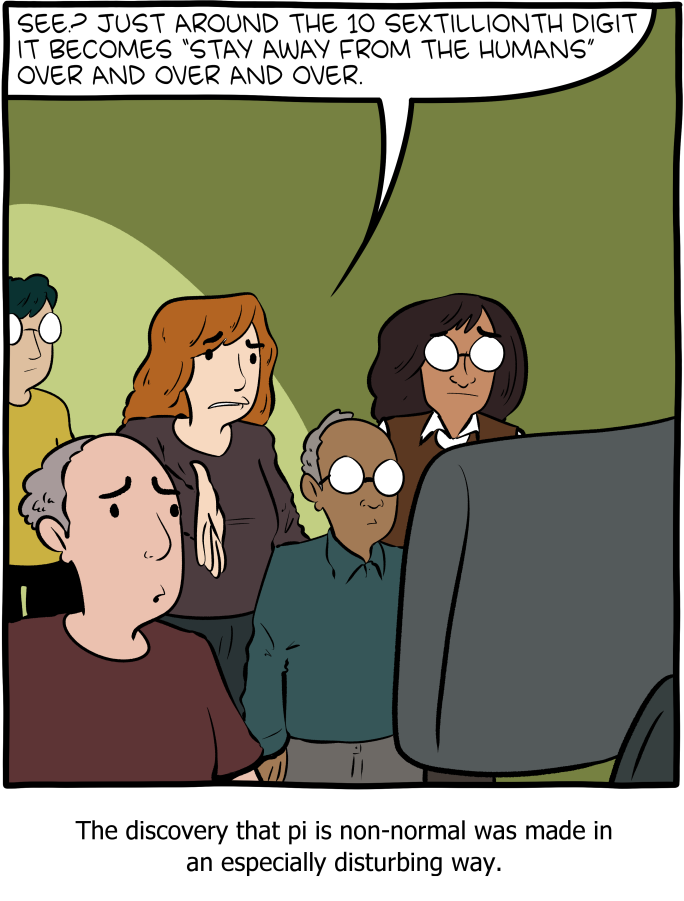 Hovertext:
I can draw perspective JUST FINE, thankyou, it's just two giant women behind a tiny man, and the guy in the back is standing on 4 crates of oranges.